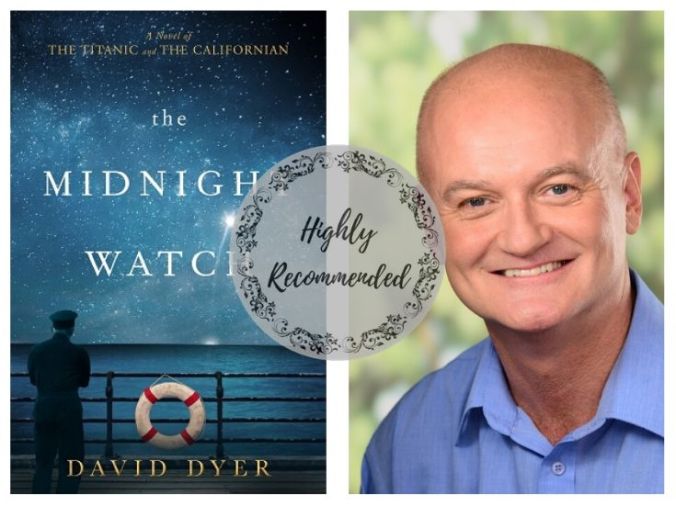 I’ve been interested in the Titanic for longer than I can remember. History is full of tragic stories, but the sinking of the Titanic is a particularly poignant one. Over 1500 men, women, and children were lost the night the ship hailed as being”unsinkable” struck an iceberg and sank. Of the passengers, the greatest loss of life was among the Third Class—76% of whom perished. 76% of the crew—including the Captain, Chief Officer, and First Officer—were lost, as well. Near enough to see the Titanic’s eight distress rockets was the Californian, commanded by Captain Stanley Lord, who could have come to their aid—but did not. Why did the Captain not issue the order to go, despite the darkness of the night sky, despite the ice field his own ship was surrounded by, and at least attempt to offer help? What really happened that night, and why?

These are the questions The Midnight Watch contemplates so beautifully, offering up a scenario of what might have happened that fateful night on the Californian. The story is told from three perspectives:

Each viewpoint was compelling in its own way. Steadman’s frustration at being thwarted when he attempts to speak to anyone on the crew other than the Captain, as well as personal issues regarding his family and the pressure he’s under from the newspaper he works for to write about the tragedy is vividly written. Herbert Stone of the Californian is incredibly conflicted between his need to do what’s right, and his desire to have his Captain’s respect. The eleven members of the Sage family are on the Titanic, traveling to start a new life in Florida. Told through the eyes of nineteen year old Stella, we see what she and her family experienced after the Titanic begins to sink.

The Midnight Watch is one of the best novels about the Titanic I’ve ever read, and it’s the only book I’ve read (so far) that deals with the Californian’s part of the story, as well. It also re-ignited my curiosity about all things having to do with the Titanic. That’s why it’s taken me a bit longer than usual to write my review—I didn’t get started right away because I’ve been looking at Titanic websites. In my world, having read something that makes me want to gain more knowledge about a person, place, or event makes a book  even better… and to have all this in a debut novel makes it absolutely phenomenal.

This is a fantastic read for Titanic history buffs… definitely a Book Worth Reading!

I received an advance reading copy of this book courtesy of St. Martin’s Press via Goodreads Giveaways.

As the Titanic and her passengers sank slowly into the Atlantic Ocean after striking an iceberg late in the evening of April 14, 1912, a nearby ship looked on. Second Officer Herbert Stone, in charge of the midnight watch on the SS Californian sitting idly a few miles north, saw the distress rockets that the Titanic fired. He alerted the captain, Stanley Lord, who was sleeping in the chartroom below, but Lord did not come to the bridge. Eight rockets were fired during the dark hours of the midnight watch, and eight rockets were ignored. The next morning, the Titanic was at the bottom of the sea and more than 1,500 people were dead. When they learned of the extent of the tragedy, Lord and Stone did everything they could to hide their role in the disaster, but pursued by newspapermen, lawyers, and political leaders in America and England, their terrible secret was eventually revealed. The Midnight Watch is a fictional telling of what may have occurred that night on the SS Californian, and the resulting desperation of Officer Stone and Captain Lord in the aftermath of their inaction.

Told not only from the perspective of the SS Californian crew, but also through the eyes of a family of third-class passengers who perished in the disaster, the narrative is drawn together by Steadman, a tenacious Boston journalist who does not rest until the truth is found. The Midnight Watch is a powerful and dramatic debut novel–the result of many years of research in Liverpool, London, New York, and Boston, and informed by the author’s own experiences as a ship’s officer and a lawyer.

DAVID DYER spent many years as a lawyer at the London legal practice whose parent firm represented the Titanic’s owners in 1912. He has also worked as a cadet and ship’s officer on a wide range of merchant vessels, having graduated with distinction from the Australian Maritime College. His worldwide research and access to countless documents and artifacts has informed and inspired his work in The Midnight Watch. He currently teaches English in Sydney.