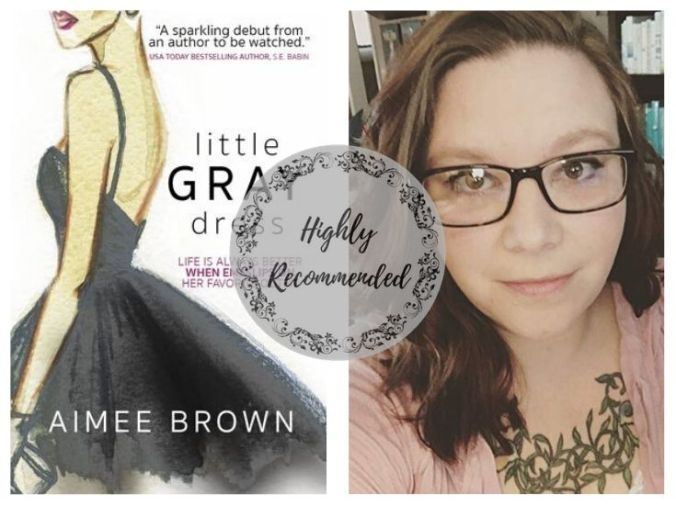 Emi Harrison is a hot mess, trying so hard to gracefully deal with seeing her ex-fiancé, Jack, again, but everything that can go wrong, does—usually in the most humiliating way. Her twin brother Evan is marrying Jack’s sister, Hannah—and he chose Jack to be his Best Man. Emi tries to settle her nerves over seeing Jack again with several drinks too many, and the first of many pre-wedding disasters strikes.

I was supposed to be reading another book, but Little Gray Dress had been sitting on my Kindle’s carousel, neglected, for nearly a month. So I told myself I would take a peek at the first chapter, then set it aside until I finished the other book. Sounds like a solid plan, right? All I needed was a little self-discipline to see it through.

As you’ve already guessed, things didn’t go according to plan. Once I started, I simply could NOT stop reading until my eyes rebelled and insisted on sleep. The little traitors didn’t care that I wanted to read just one more chapter. (How rude! Maybe they knew I was lying about wanting to read just “one” more?) Which reminds me… this book should come with a warning label, because it’s guaranteed to keep you reading into the wee hours of the morning. (Or until your eyes turn traitor on you the way mine did—whichever comes first.)

I picked up where I left off the next morning, eager to see how it ended, and then my Kindle turned traitor on me, too! I was on the final stretch of the story when the stupid battery decided it was the perfect time to run out of juice. The text blurred and the screen went dark right in the middle of a crucial moment. Seriously?! My charger (who is not a traitor) did its job and I was finally able to finish reading.

All kidding aside… I simply adored this book. Chaos was Emi’s close companion through much of the book, and even during embarrassing moments that made me wince in empathy for her, I couldn’t help but laugh. Poor Emi goes through a lot of cringe-worthy mishaps that are rife with humor.

The events surrounding the wedding take place in the present, but readers are also given insight into Emi and Jack’s history through flashback chapters. The flashbacks don’t happen in exact chronological order, and it works very well at filling in the blanks of their relationship about some things, while leaving you in the dark (for a while) about others.

No story is complete without a villain, and Brown provides us with one that is truly terrible. I won’t give away who it is, but I can tell you that I absolutely despised this character. Emi went through a lot at the hands of this character, and I’m pretty sure I growled every time this person appeared in the book. Kudos to the author for creating an antagonist that I won’t soon forget.

The remaining cast of characters are as delightful as the villain is despicable. I especially loved Emi’s best friend, Lily. No matter what happened, she always had Emi’s back, but she didn’t shy away from setting her straight about things, either. We should all be so lucky as to have a friend like Lily!

All in all, Little Gray Dress is a delightful story, filled with funny situations that will having you laughing out loud, touching moments that bring a tear to your eye, and a reminder that being in love with the right person can be truly magical.

You don’t want to miss out on this one, folks. This is a book worth reading!

Emi Harrison has avoided her ex-fiance, Jack Cabot, for nearly two years. Her twin brother Evan’s wedding is about to end that streak.

From bad bridesmaid’s dresses, a hyperactive sister-in-law, a mean girl with even meaner secrets, and too much to drink, nothing seems to go right for Emi, except when she’s wearing her little gray dress.

When she speed-walks into Liam Jaxon’s bar, things get more complicated. He’s gorgeous, southern, and has no past with Emi. He may be exactly what she needs to prove for the last time that she doesn’t need or want Jack!

Her favorite little gray dress has made an appearance at nearly every major event in Emi’s adult life. Will it make another grand appearance when she least expects it?

AIMEE BROWN is a writer and avid reader, often blogging her thoughts on chick lit books. Little Gray Dress is her first novel published. She’s currently studying for her Bachelor’s degree in English Writing. She spends much of her time writing her next book, doing homework, raising three teenagers, binge watching shows on Netflix and obsessively cleaning and redecorating her house. She’s fluent in sarcasm and has been known to use far too many swear words.

Aimee grew up in Oregon but is now a transplant living in cold Montana with her husband of twenty years, three teenage children, and many, many pets.

Author photo and bio via Goodreads.