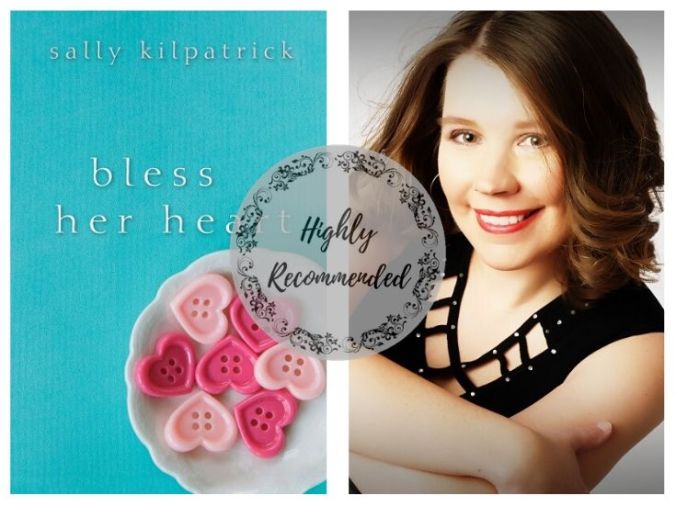 There were only three words in the English language that I hated with all of my being: bless, your, and heart—specifically in that order.

Every Southerner knows what it means when someone blesses your heart, so it’s no mystery why Posey Love hates hearing that phrase, especially after a lifetime of having her heart blessed by someone. But then, her life hasn’t exactly turned out the way she’d planned, either. She thought she would be a teacher, married with a couple of kids. At 32, she was married, had no children, and is a receptionist at her husband’s church, Love Ministries. She’s content with her life—for the most part—and feels completely blindsided when she discovers that not only is Chad having an affair, he’s also mismanaged their money and sold their home without telling her.

With no money and nowhere else to go, Posey goes home to her mother, Lark, whose lifestyle and youthful escapades were the source of most of the “bless your heart” comments Posey received throughout her life. With the help of her younger sister and her best friend, she’s able to clearly see her husband’s true character, and how he manipulated and controlled her throughout their marriage. After years spent following all the rules imposed on her by Chad, Posey is feeling more than a little rebellious. She starts breaking rules for a change—working her way through each of the Seven Deadly Sins—and starts living the life she dreamed of… on her terms this time.

The title alone was enough to spark my interest, but when the blurb mentioned it had “just the right amount of Southern sass” I was sold. How could I resist that?

Posey Love has earned a spot on my favorite characters list. She made me laugh so hard. I nearly died when she took a pole dancing lesson at the Pole Cat… SO funny! That scene is a treasure, trust me. The banter she had with her friend, Liza, always brought a smile to my face. I’m pretty fond of Liza, as well. I could completely relate to the moments when Liza is a sleep-deprived mess because her baby isn’t sleeping through the night.  New motherhood isn’t always pretty, and I loved the realism of all those scenes.

Another character I particularly liked was John. He definitely had flaws, but he was a good guy. I really enjoyed seeing how things unfolded between him and Posey, and I liked that it wasn’t always easy. Whenever there was a conflict between them, it made sense to me that (things I won’t mention) would be an issue for one of them. Chad, on the other hand, was a character I disliked him almost as soon as he appeared in the story. Later on, I came to despise him for something he did. I won’t give away what it was, but he committed a particularly heinous betrayal against Posey that made me so mad, I had to take a moment and say a few choice words before I could go back to reading.

I adored this book. All the characters (including several I didn’t mention above) are incredibly well written and (with the exception of Chad) delightful in every way.  Posey’s growth as a character was outstanding, and I loved the way she was able to take charge of her life and do what was in her best interests, and not worrying what someone else would think about it. While the ending came a little too soon for me—I wasn’t ready to let go of the characters yet—I loved the final line of the book.

Kilpatrick’s writing is superb throughout, creating a fabulous cast of characters that I won’t soon forget. This is the first book of hers that I’ve read, but it won’t be the last. She definitely has a new fan in me.

Be sure to put this one on your TBR list, folks! Trust me when I say you do NOT want to miss out on this little gem—this book is most definitely a book worth reading.

I received an advance review copy of this book courtesy of Kensington Books via Netgalley.

Laugh-out-loud funny and unabashedly uplifting, with just the right amount of Southern sass, Sally Kilpatrick’s wonderful novel centers on one woman’s journey from unhappy marriage to a surprising second chance . . .

On the day Posey Love discovers that her born-again husband has been ministering to some of his flock a little too eagerly, she also learns that he’s left her broke and homeless. Posey married Chad five years ago in hopes of finding the stability her hippie mother couldn’t provide. Instead she got all the trappings of security—house, car, seemingly respectable husband—at the price of her freedom.

Posey’s mother, Lark, accepts her daughter’s return home with grace, though her sister can’t resist pointing out that being a sweet Southern wife hasn’t worked out as planned. And so, with the Seven Deadly Sins as a guide, Posey decides to let loose for once. Envy is easy to check off the list—Posey only has to look at her best friend’s adorable baby for that. One very drunken night at The Fountain bar takes care of gluttony. As for lust—her long-time friend, John, is suddenly becoming much more than a pal. One by one, Posey is bulldozing through her old beliefs about love, family—and what it really means to be good. And she’s finding that breaking a few rules might be the perfect way to heal a heart . . .

SALLY KILPATRICK writes southern fiction full of small towns and big hearts. She is a two-time Maggie Award of Excellence finalist, a Golden Heart® finalist, a Book Buyer’s Best finalist, and a National Readers’ Choice Awards triple finalist. Her next novel, Bless Her Heart, will be released on Halloween and explores what happens when a preacher’s wife decides to sample the Seven Deadly Sins. Sally lives with her husband and two children in Marietta, Georgia, a suburb of Atlanta. Visit her author website at sallykilpatrick.com or follow her on Twitter as @SuperWriterMom.

7 thoughts on “Bless Her Heart by Sally Kilpatrick”