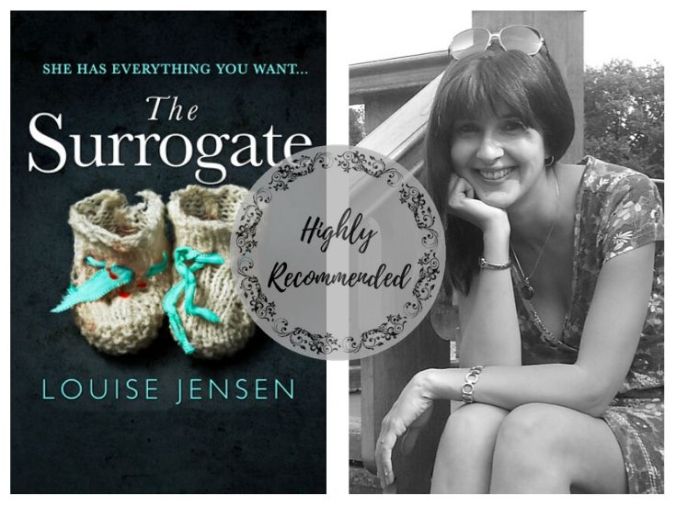 Kat and Nick are on the verge of giving up on their dream to become parents. Unable to have a child of their own, they decided to adopt a baby instead—only to be crushed after the adoptions failed to go through not once, but twice. Then Kat unexpectedly sees her old friend, Lisa—whom she hasn’t spoken to in years, for reasons readers aren’t privy to until later in the book. Rather than the upset she expected, the two women fall back into their friendship as though their estrangement never happened. The despair Kat feels over not having a child changes to hope when Lisa offers to be a surrogate for Kat and her husband. Her dream is about to come true… or is it? Lisa begins to do things that make Kat suspicious, and she wonders if her past is coming back to haunt her, but she could never have foreseen the horror that awaited her.

The Surrogate doesn’t waste any time in grabbing the reader’s attention, kicking off at a crime scene with two bodies and a murder investigation. The identity of the victims, along with how (and why) they died isn’t revealed until the end, but the ultimate reveal is WELL worth the wait. Holy guacamole… what a fantastic ending!

I’ve been a fan of Jensen’s since the start, and I loved reading both The Sister and The Gift. With a twisty plot, complex characters, and a story rooted in a poignant desire for motherhood that’s guaranteed to tug at your heartstrings, The Surrogate is her best effort yet. I can’t wait to see what she comes up with next!

If you haven’t been reading any of these fantastic books… what are you waiting for? Like I said when she released her debut novel… you need to put Louise Jensen on your Author Radar. She is definitely deserving of a prime spot in your list!

I received an advance reading copy of this book courtesy of Bookouture via Netgalley.

‘You know that feeling? When you want something so badly, you almost feel you’d kill for it?’

Be careful what you wish for…

Kat and her husband Nick have tried everything to become parents, and are on the point of giving up. Then a chance encounter with Kat’s childhood friend Lisa gives Kat and Nick one last chance to achieve their dream.

And there is more to Lisa than meets the eye.

As dangerous cracks start to appear in Kat’s perfect picture of happily-ever-after, she realises that she must face her fear of the past to save her family…

LOUISE JENSEN is a USA Today bestselling author of psychological thrillers. Her first two novels, The Sister and The Gift, were both international bestsellers, and have been sold for translation to sixteen countries. Her debut novel, The Sister, was nominated for The Goodreads Awards Debut of 2016.

Louise lives in Northamptonshire with her husband, children, madcap dog and a rather naughty cat. She loves to hear from readers and writers and can be found at LouiseJensen.co.uk, where she regularly blogs flash fiction.

8 thoughts on “The Surrogate by Louise Jensen”